1. Sometimes we need a “bigger canvas” in our life. Small thinking doesn’t serve us and we need to step way back for a bigger view of what’s possible. Linklater wanted to tell a story about growing up and most of the stories about kids are just a moment in time. He wanted to show it all and said “I needed a bigger canvas.” 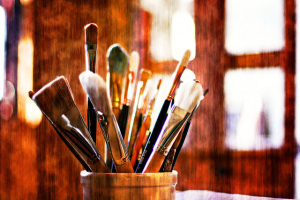 2. Find a cool way to tell your story. It makes for a much better story. Linklater thought it would be cool to show adults in his story actually growing older and show the kids growing up. Jon Stewart’s response: “It was a really cool (and incredible) way to tell the story.”

3. Aging happens when you’re doing something big. The young boy was seven when he was cast. He is now 19. The audience reaction is priceless as they gasped until they realized that that’s what happens when 12 years go by.

4. You need family and friends and other things to do to support you through the long haul while painting your bigger canvas. The young girl in the movie is Lorelei who was nine at the beginning of the film. She is Linklater’s daughter. He also directed other films during this 12- year period.

6. Take a leap of faith. This film could have gotten derailed anywhere, at any point along the 12-year journey. Stewart asked Linklater if there were any years where he felt “I’m not going to make it.” He responded “no”. It's that simple when you are pulled to make your dream real.

8. Think of it as a life project. That’s how he thought of the movie. It’ll be cool to see the kids grow up and have us, his audience, be witnesses to these lives. What would be different if you thought of your life as a project?

9. Collaborate with the unknown. He didn’t know where the culture was going, and the movie unfolded organically. He had no idea where it was heading or what the end looked like. This was an unknown for him, but this did not stop him. He ventured into the unknown. This seems to me to be exactly what life is like.

10. You are creating a period piece in the present. It’s called your life. One of the things Linklater said was he had to think of what his creation was going to look like 11 to 12 years down the road. Everything ages and sometimes there is no end in sight for so long…and then the end comes. That quickly.

11. Use your life well. Consider yourself the artist of your life and get working on your masterpiece. Stewart commented that he processed his own life while watching the movie and that it felt like watching an artist take everything they learned over their life and have it all come together for the effect of this one beautiful master work. What's your masterpiece?

Yes, I learned all that in a brief 6 minutes and 33 seconds. Pretty amazing what you learn when you really pay attention.

Now, I’m off to see the movie.

About Richard Linklater Richard Linklater wrote and filmed the movie “Boyhood” (2014) over the course of a dozen years beginning in 2002 and won the Silver Bear for Best Director for the film at the 2014 Berlin Film Festival. Linklater’s career as an independent director took of in the 1990s with the creating of Detour Filmproduction and the success of his movie “Slacker” (1991). He also wrote and directed “Before Midnight” (2014), “Before Sunset” (2004) “Before Sunrise” (1995) and “Dazed and Confused”(1993). “Before Sunset” and “Before Midnight” were both nominated for the Oscar for Best Writing, Adapted Screen play, in 2013 and 2004, respectively.
By Pat Obuchowski
Under Gutsy Women Win
4 min read
Like
Share Tweet Share