The Value of Naysayers in Your Life

“True friends stab you in the front.” - Oscar Wilde

Naysayers are the people in our life who pretty much attempt to kill our ideas. They can be competitors, road blockers, people who actually voice all the negative things our monkey mind is telling us. There are many reasons they may try to sabotage our moving forward in our games, but those reasons are not relevant. What is relevant is that you need to be able to say “thank you very much” and move on. As Courtney Ruby, former elected City Auditor of Oakland, CA said, “It is as important to thank those that oppose you as it is to thank those that support you, because they are wonderful teachers that can lead you to becoming a better you, if you allow it.” 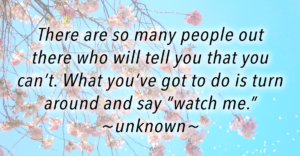 For Dru Rivers, Co-Owner of Full Belly Farms, a “naysayer” ally was the university she attended, which taught chemical farming and not organic farming. (She said 'no' to chemical farming on her land.) Other naysayers were the farmers she sought out for advice early in her farming years. Thirty years ago there were a lot of statements like “You can’t feed the world organically” and “It’s a fallacy that you can do it without all these chemicals.” It was a really big gulp for her to say anything in opposition to those farmers. But she did.

“Now it’s fun,” Dru says, “because we have the university begging us for tours so they can show people what we are doing. That was, and at times still is, a very big push for me. I enjoy just sitting back and going ‘I told you so.'"

In her position in politics, Courtney knows that some of her biggest allies have been naysayers. She has grown immensely in learning how to respond to this type of ally. “Some people I thought would be on board with me ended up not being on board. I took this to heart, because that was hard. One of the darkest nights I had in this work was realizing the nastiness of some of the other elected leaders and how they were interacting and maneuvering with my position. I really had to get into my tears and get into my own space and had to grieve. I was grieving about this being where we were and that was how Oakland was operating. These types of interactions were not for Oakland’s best. We were no longer looking at a common goal. We were engaged in the game of petty politics, but once I really understood this was what I was and [could] accept that and grieve it, then I could move forward in a way that I had not been able to move before. It was because I accepted it as is. Once I could do this, I could change it.”

In her book Paradigm Found: Leading and Managing for Positive Change, Anne Firth Murray, Founding President of the Global Fund for Women included an entire section on naysayers. For her, these are the people who are negative about your ideas and say they can’t be done or they’re impossible. “In a start-up, at the very beginning at least, it is very important to either not associate with these people or instantly turn what they are saying into a to-do list of things that you can consider how to respond to when the same negative input comes from someone else.”

Naysayers are important to former Chief Diversity Officer at Cisco Systems, Sandy Hoffman's journey. “I think you need both supporters and naysayers as allies. If you depend on your trusted advisors and they are always saying yes, you are going to get too comfortable again and go back to your comfort zone. You need to balance it with the no’s in order to push you.”