In my leadership coaching business, I discuss in depth with my clients the importance of “servant” leadership. This phrase was coined by Robert K. Greenleaf, who was the founder of the modern Servant Leadership movement and the Greenleaf Center for Servant Leadership. In 1970, he published his first essay, entitled “The Servant as Leader,” which first introduced the term “servant leadership.” 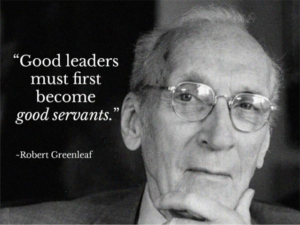 “The servant-leader is servant first. It begins with the natural feeling that one wants to serve, to serve first. Then conscious choice brings one to aspire to lead. That person is sharply different from one who is leader first, perhaps because of the need to assuage an unusual power drive or to acquire material possessions. For such it will be a later choice to serve—after leadership is established. The leader-first and the servant-first are two extreme types. Between them there are shadings and blends that are part of the infinite variety of human nature.

The difference manifests itself in the care taken by the servant first to make sure that other people’s highest priority needs are being served. The best test and difficult to administer is: Do those served grow as persons? Do they, while being served, become healthier, wiser, freer, more autonomous, more likely themselves to become servants? And, what is the effect on the least privileged in society? Will they benefit or at least not be further deprived?

It can’t be all about you if you want to make a difference. You do not move in your world without coming in contact with others. You cannot better your world without bettering others, and vice versa. It’s that old adage “We’re in this together,” and playing a bigger game reminds me of this and pushes me in the direction of “Don’t you forget it.” It is also a very strong a confirmation that we belong to one another.

I was looking at the hunger that was waking up in me. That hunger was to see more kindness in a world where I believe people are no longer as kind to one another as they once were. I have always had a strong feeling that all people must be seen and heard; they need to know they make a difference. This “seeing” and “hearing” others is one of my definitions of kindness.