The Importance of Acknowledging Others

The best way to acknowledge others. Stop. Look. See each other.

How many times have we asked someone “How are you?” hoping we don’t get more than a one-word response such as “Fine” or “Good?” How often do we just continue to walk on and not stop to acknowledge the person answering—or perhaps asking—the question, just so we’ll be able to continue with whatever we were doing with minimal disruption?

How does it make you feel to not be acknowledged or to be brusquely brushed off or completely ignored?

For me, there is a depth of validation for each other as human beings that is missing in our current world.

I have often wondered how other cultures greet each other. I found that among the tribes of northern KwaZulu-Natal in South Africa, the most common greeting that is equivalent to “hello” in English is the expression “Sawa Bona.” It means, “I see you,” as if to say, “I respect and acknowledge you for who you are.” If you are a member of one of the tribes you might reply, “Sikbona,” which means, “I am here,” as if to say, “When you see me, you bring me into existence.” The order of the exchange is important: until you see me I do not exist. 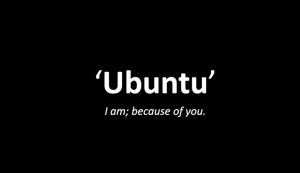 This meaning, implicit in the language, is part of the spirit of ubuntu, a frame of mind prevalent among native peoples in sub-Saharan Africa. The word ubuntu stems from the folk saying, “Umuntu ngumuntu ngabantu,” which, from Zulu, literally translates as “A person is a person because of other people.” If you grow up with this perspective, your identity is based upon the fact that you are seen; that the people around you respect and acknowledge you as a person.

During the last few years in South Africa, many corporations have begun to employ managers who were raised in the tribal regions. The ubuntu ethic often clashes subtly with the culture of those corporations. In an office, for instance, it’s perfectly normal to pass someone in the hall, while preoccupied, and not greet them. This would be worse than a sign of disrespect under the ubuntu ethic; it would imply that you felt that person did not exist.

An internal consultant who had been raised in a rural village became visibly upset after a meeting where nothing much had seemed to happen. When a project in which he’d played a key part came up for discussion, his role was not mentioned or acknowledged. Asked later why it had bothered him so much, he said, “You don’t understand. When they spoke about the project, they did not say my name. They did not make me a person.”

You could argue that we invoke each other’s potential by our willingness to see the essence of the other person. It’s that essence that I think we’re all yearning for. That feeling of being seen. Just stop and imagine what others would feel like if we greeted each other this way all the time.

What if we stopped and let others know “I see you?” How do you think it would feel for you to be seen? How could you not be kind and speak kindly and want kindness for someone who sees you?

As Dr. Elizabeth Taylor, author of Wisdom to Go, stated, “It’s a good thing to take the full measure of the man, woman, youth and child you meet along the way. It is noble to make the acknowledgement of the 'other' a valued everyday practice, and to exit each human exchange with the full satisfaction of knowing that you brought someone else into existence.”

This is the essence of what we as human being yearn. We have a hunger to be in deep conversation with each other, seeking to be understood and seeking to have others feel they are being understood. People sharing their brilliant and fabulous ideas and others being curious, listening intently, and welcoming—even actively asking for—conflicting ideas helps us all grow.

Imagine a world where this exists.