That Time I Put Up With a Lot of Bull

A young John Travolta played a country cowboy who comes to the big city of Houston, hangs out at Gilley’s to learn about life and falls in love with an urban cowgirl, Debra Winger. It was a smash hit.

Gilley’s was a country western bar complete with country western music, country western dancing and country western drinking. In the center of the bar was a mechanical bull ride. This is a ride that replicates the feeling of riding a bull in a rodeo. It looks like a long saddle supported by a pole in the middle. The speed of the ride can be adjusted to control how fast the bull bucks and spins. Padded flooring surrounds the bull in order to prevent injury to those thrown off it. The bull ride was a main character in the movie. 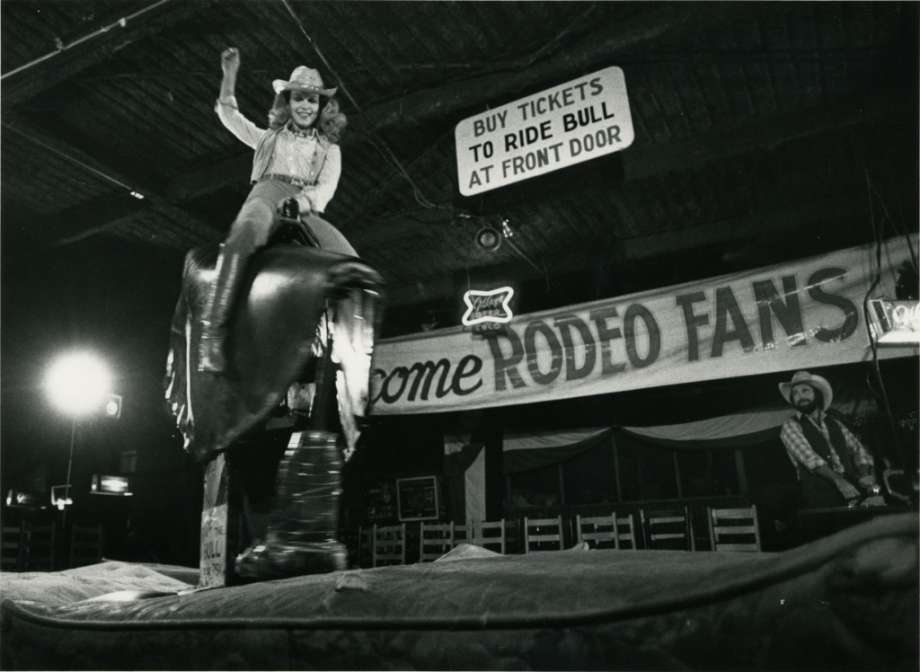 When this movie was released, I was a young woman, early in my business career. I worked for a very male dominated company in the electronics industry. I was in the operations organization managing inventory control, purchasing and equipment distribution for this company. I was also the only woman in a management team of close to 20 men.

It was very challenging being a young woman in this position in this industry. I had to work really hard to keep up and be even better than the men in my work.  I had to be very resourceful, keep up my knowledge of the industry, my knowledge of sports, my ability to stand up for what I thought was right and even my ability to keep up with the boys at the bar. At that time, in the business world, I had to be one of the boys.

During that same year, we had an operations meeting in Houston. Houston! I couldn’t believe it. Houston! Urban Cowboy! Gilley’s! Ya-Hoo! I was going to Gilley’s! John Travolta, Debra Winger, but most of all…..El Toro.

Our business meeting that day in Houston was full of challenges, disagreements, yelling and even almost a fist fight. But who cared, that night we were going to Gilley’s and El Toro would be mine!

When we got to the bar it was so much larger than I’d imagined. There were three separate bars each with its own dance floor and each with a separate corral with its own mechanical bull. I stopped at the first bar, got a Lone Star beer and began my hunt for El Toro. I walked around and found him. There he was. El Toro…my bull. Just as I’d imagined him. Alone in a huge corral. Just waiting. For me.

I turned to my compadres and tried to find one other soul who wanted to ride along with me to add a bit of competition to the game. No one. Not one single man would join me in the challenge of riding El Toro.

Then I heard his voice. “Let’s go, I’ll do it with you.“ It was our security manager, Bard Dunkelberger. My mentor and teacher. Bard.

Bard was around 60 years old and must have weighed close to 250. I really could not picture him riding the bull. But, I didn’t care. He said he wanted to go. And so did I.

I walked up to the entrance of the corral. The operator of the ride, Joe, had me sign a disclaimer that was too long to read and I had too many Lone Star’s to read it clearly anyway. I signed it figuring if I died riding the bull I would be in no condition to sue them anyway.

Joe said in a long drawl “Ma’am, what speed would you like?”  I looked and saw it ranged from one (the slowest) to five (experienced rodeo bull riding).  Wanting to really prove myself to the boys that I could do it, I said “Five.”

He looked me up and down, smiled a slow smile, and just said “Alrighty.”

Along with my compadres, the corral was now surrounded by onlookers. I strolled up slowly and confidently to El Toro. Looking him directly in the eye, or at least where I thought his eye should be, I slowly got on. I settled in and smiled at all the onlookers. I put my arm up in the air, just like Debra Winger, and saw that Joe was walking toward me. He came up to the saddle and leaned forward. He looked at me and said, in that Texas drawl that’s a requirement at Gilley’s, ”Ma’am, you’re on the bull backwards.”

I looked at him stunned, in disbelief, and said, “You’ve got to be kidding me.”

I said “Joe, What do I do? People are watching me.”

He said “Ma’am, just get down and turn around.”

So I took a deep breath, gathered all the grace and dignity I could, got off, turned around and got back on again.

Joe looked back to the other operator and said in a voice I am quite sure everyone heard, “Charlie, turn it down to one.”

I looked around and saw everyone laughing and I just started to laugh myself.

I raised my arm up to the air and El Toro started, very slowly at first, but quickly picked up speed and spin. I rode El Toro for the entire length of the ride which was about 30 seconds and stayed on the whole time. John Travolta.  Debra Winger. And now, Pat Obuchowski.

I got off to face a cheering crowd and bowed very gracefully.

Bard Dunkelberger never rode El Toro that night. He didn’t, and neither did anyone else from my group.

So, I did it. That night I was finally accepted. And I learned…that to be one of the boys…you have to put up with a lot of bull.
By Pat Obuchowski
6 min read
Like
Share Tweet Share