“The opposite of NET working is NOT working.” – A Very Smart Person

I once coached an executive in a company whose job was eliminated suddenly and without warning. After we worked on her surprise, anger, and fear of the circumstance, it was time to begin to focus on networking. 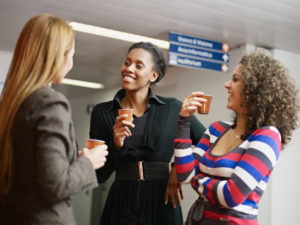 When I broached the subject her response was, “Pat, I have no other network than the people I work with.”

She had stopped networking outside of the organization and neglected to plan for the time that she might need to have a network to help her. Recent statistics on Payscale estimate that upwards of 85 percent of open positions are filled through networking and 70 percent of people ended up in their current position thanks to networking. I want to know who thought of the term network? First of all, why call this work?

We all work plenty so why should our time spent outside of work be in any way called work? Then I wondered about the term net, so I looked up the definition: an entrapping device or situation, a device for catching fish, bird, or insects. No wonder we don’t like networking.

In addition to calling it working, now it feels like those fish getting caught up in the net as the net is being pulled through the water in trolling. I hated networking as I used to think of it as hunting. Something that is like trolling others. Stalking. Uncomfortable.

Then I heard the quote that was about networking being more like farming where we plant a seed and grow and take care of it over time. This perspective changed networking for me and I began to look at it through the lens of building relationships instead of frantically meeting as many people as possible. I realized when I set my networking goal to collect as many cards as possible at an event, within a few days, honestly, practically overnight, I’ll only remember about two of the contacts, if I’m lucky. I stopped using the term Networking. I call it ‘open exchange’. This reframing helps me look at it differently and anything sounds better to me than networking. It helps me change my mindset and approach people in an entirely different manner. And people can feel the difference. I also reversed my thinking around networking. Instead of taking the attitude of “What can I get from you?” I now approach this as social exchange and ask, “How can I serve you?”

Here are my Top 10 reasons I value and learn from networking with some suggestions and tips on how to make it a more uplifting experience not only for you, but also for those around you who are in the same boat.

Because here’s the secret I always tell myself. I’m not going to see 99.9% of these people ever again. So, go for it. Put your heart and soul into participating in open exchanges and since we’re farming we might as well bet the farm on giving it all we’ve got. Otherwise, why bother?