One Hard Lesson I Learned About Making Assumptions

Most of our assumptions have outlived their uselessness. 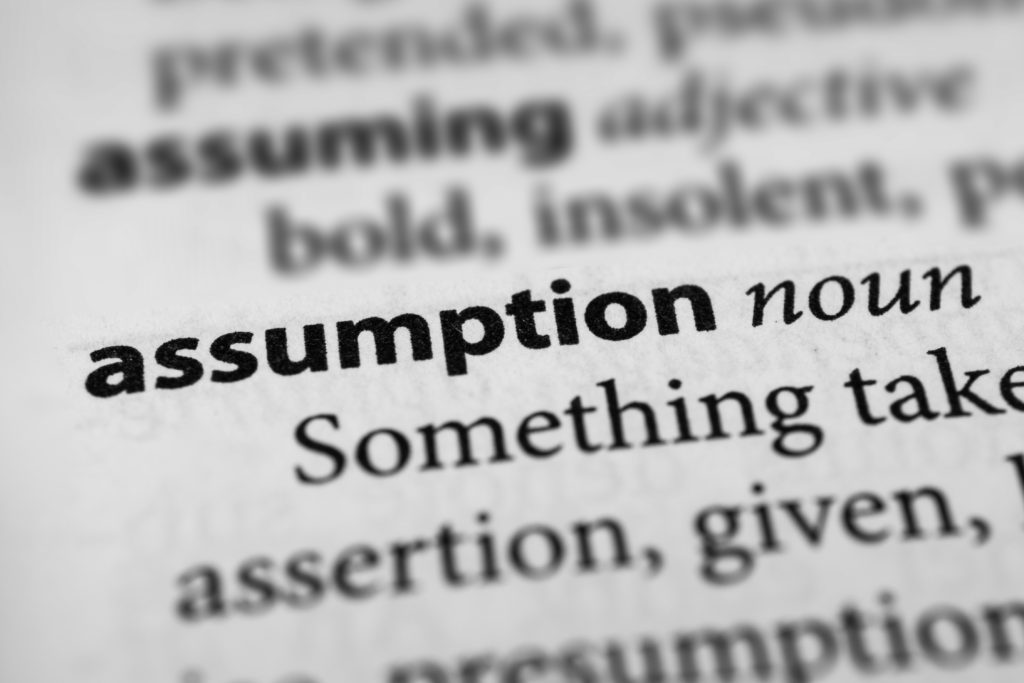 There is the old saying “Don’t assume, it makes an ass out of u and me.”  I don’t know the origin of it, but I can tell you I have experienced that feeling of being an ass so many times I stopped counting. Just recently, I was reminded again of the problem with my making assumptions. Here is just one of my experiences in this area.

I had a dental appointment and drove into a spot in the parking lot and parked next to a painter's truck. I passed through the hallway and saw the painters painting the bathrooms. I even said ‘hello’ in my usual friendly manner and continued on to my appointment.

The dentist was running late, which caused me to run late. I left the building a bit frazzled as I was now running late for a client appointment even though I left plenty of time between appointments.

When I got to my car, on my brand new white SMART Passion car, were small spots of white drops all over the roof, the rear end, and the passenger side. Imagine. Brand new car, just washed the day before, and now there are white spots all over it.

After I got over the initial shock I remembered there was a painter’s truck parked next to my car when I arrived. The truck was now gone, and of course, I assumed it was their paint on my car.

I stormed back into the dentist office and demanded to know who the property manager as I was gong to tell him immediately what happened and demand compensation for this damage.

I commiserated with several people in the office about how awful it was and they told me don’t let them touch the car but take it to a body shop and wasn’t it awful that people just don’t care any more, and how could someone do this and not see it, and how could they just take off like that, and ad infinitum.

When I saw the paint truck pull up, I went back outside to give them a piece of my mind. They came to my car and told me those white spots could not possibly be their paint. If it was paint, it would have dried to a really hard finish and be very hard to get off and besides, they were not even working with white paint.

As I looked closer to prove them wrong, as I was positive they were, sure enough, it was, to put it mildly, bird poop!

Imagine my embarrassment. Imagine what an ass I felt like because of my assumption. I apologized profusely and with that the painter grabbed a rag and proceeded to clean my car for me!

I truly believe this was a great reminder to me to check my assumptions.

Begin challenging your own assumptions. Your assumptions are your windows on the world. Scrub them off every once in awhile, or the light won't come in.

As I drove to my client’s office I began to look at some other assumptions I was making about a few other situations in my life. I questioned these assumptions and took the perspective of what if my assumption was wrong? I was able to get a different perspective.

What assumptions are you making that need to be scrubbed off?

Thank you Cortes for your comment. Yes! This is a hard lesson to learn and glad you are peaking under those blinders. I am too. I'm not saying I don't assume things any longer, but at least now, I catch myself and check by asking what is factual.
Read more
Read less
Like
Reply almost 4 years ago
Please log in or register to post a comment
Cortés

Excellent real life example to share! Thank you for telling the story and sharing your embarrassment, vulnerability and...resiliency to immediately apply this lesson learned in other areas of your life. I have been applying the "don't assume" lesson in my life which does not mean don't speak up, but rather for me it means in my speaking up to "ask" or "explore a situation from another lens", to broaden my perspective depending on the circumstance. Even so, I would have assumed like you, that the painters were the culprits, so your story lets me do more self-reflection on my own blinders. Thanks Pat!!
Read more
Read less
Like
Reply almost 4 years ago
Please log in or register to post a comment